Al-Farabi Kazakh National University (Kazakh: Ál-Farabı atyndaǵy Qazaq Ulttyq Ýnıversıteti), also called KazGU or KazNU, is a university in Almaty, Kazakhstan. Named after the Eastern philosopher and scholar al-Farabi, it is one of the country's largest universities.

KazNU is the oldest classical university of the Republic established by a Decree of the Kazakh Regional Committee (KRC) office dated November 13, 1933. One year after Kazakhstan's 1990 declaration of independence, the name was changed to Al-Farabi Kazakh State University. According to the QS World University Rankings KazNU takes 207th place in the rating of the best universities of the world.

In 2001, the government classified it as a "national" university. More than 20,000 students, post-graduates and PhD students study at KazNU, and there are more than 2500 faculty members working at KazNU, including 400 doctors of science, professors and more than 800 candidates of science and associate professors. Like other universities founded under the Soviet system, it is highly centralized.[clarification needed] 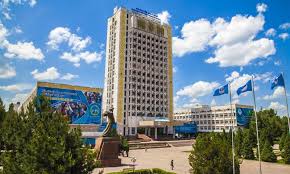 The university has its own campus, so-called "Kazgugrad", on land between Timiryazev Street, Al-Farabi Avenue, the "Yessentai" ("Vesnovka") river, and the Botanical Garden. The main building (GUK) is 15 stories tall and hosts the university administration as well as the History, Economics, Law, Philology and Journalism departments.

To get your acceptance at the University for free .. Register with us now